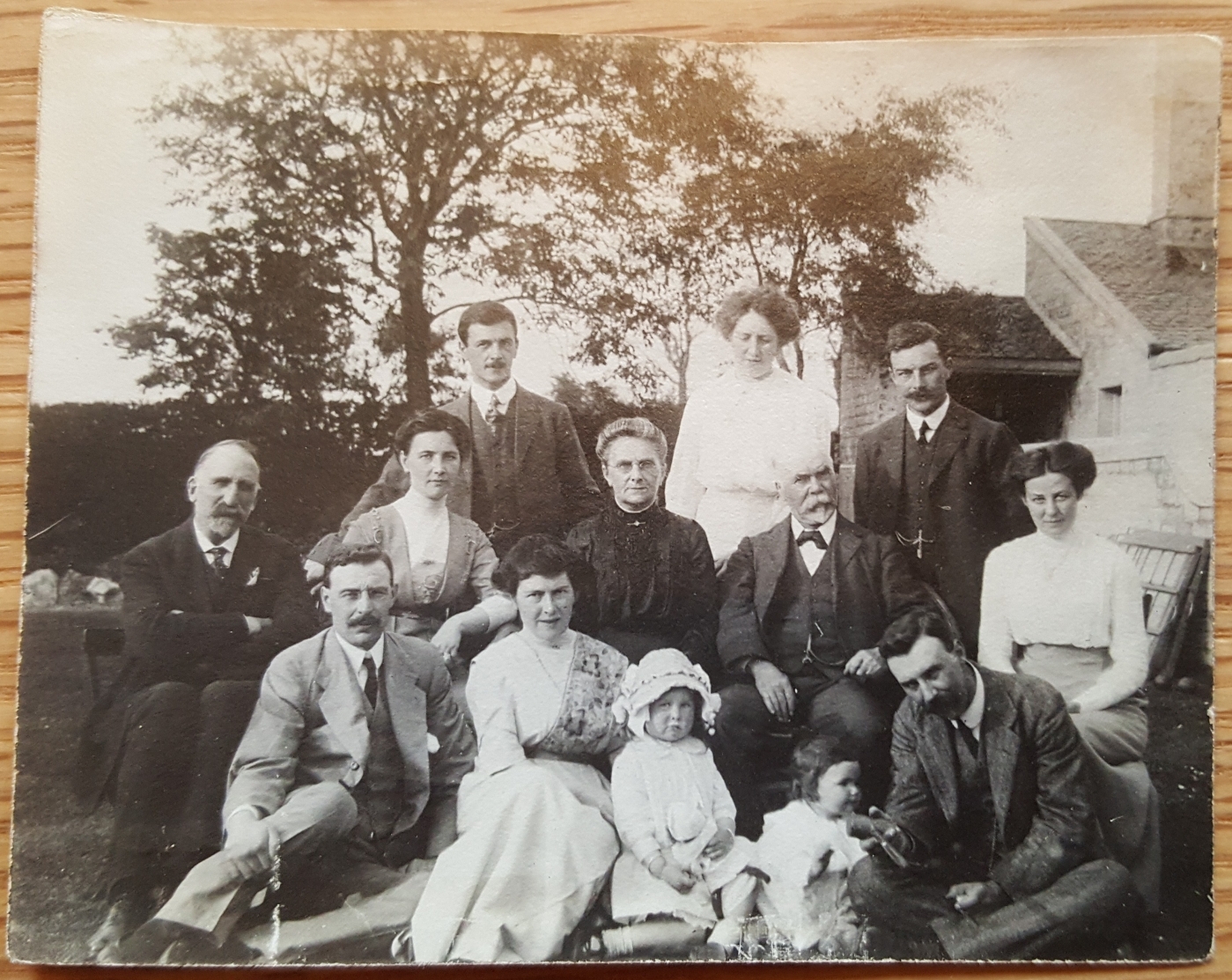 This Scottish summertime photograph, helpfully labelled on the back, celebrates the 35th (so-called coral) wedding anniversary of James Scobbie and Mina Laughland on July 3rd 1913, just before WW1. For photos from their diamond wedding celebrations in 1938 just before WW2 along with newspaper biographies, see the post on their diamond, gold and “ruby” anniversaries. A looming war is invisible in photographs like this, if we can resist the temptation to use hindsight to pour meaning into the expressions of the people in these gapless gatherings.

Looking back nostalgically to Edwardian days and to 1913 in particular remains a popular meme. This photograph could be from any number of costume dramas, films or TV shows, or could inspire yet another story that concentrates gradual ongoing social and political changes into the cataclysmic events following the so-called “long summer of 1913”. The British middle class myth is that this was a Golden Age before a generation was cut down and social changes unleashed. But things were never really golden all around: just ask the miners that provided the Scobbie family’s wealth. Nor were the social changes so sudden or unexpected. And it was not even that Britain was particularly disrupted by the Great War or by the 1920s’ Great Depression, in comparison to the rest of the world.

James Percy Scobbie (1893-1909) as the “baby of the family” would have been 20 when this photo was taken, had he not died in an accident as a 16 year old, also in July. More happily, David and Marion had been married on 17th April, a couple of months earlier.

The other grandchildren of James and Mina were not present, but for completeness this page usefully lets me list them all in one place with relevant dates and names of marriage partners, and anything I know about jobs. Some of their children are still living so after that I have given only the numbers of sons and daughters and no further details. Please do get in touch, extended family, if you want me to add links or specific details.

In brief, organised by family, the five Logan children were Norman, (who married 2nd cousin Winifred),* Kenneth, Wilhelmina, Catherine, and William. David and Marion (not Marian) Scobbie never had children. David McKenzie and Ebeth Newton had just one surviving child, born after David’s death, Elizabeth Newton (b. 1916). Elizabeth was the prime researcher for James and Mina’s linked family trees. George and Bertie Scobbie’s other children were born later: Ebeth (b. 1914), Dorothy (b. 1918) and “Jim” (b. 1920).

David Newton is named on the back of the photo as “McKenzie Newton” which might mean he was known by his middle name to family and friends. “Jack” Newton, his brother, was the the John Newton who wrote seeking help from the government three years later when David died in Smyrna.

John and Mabel Logan lived in Hermitage Drive, Morningside, Edinburgh, very close to Greenbank Church where later Ebeth would be remarried to Robert Galloway, and some of their children also lived in Morningside.

I will gradually scan and add photos of as many of these people as I can, or give them specific pages, and link to there from here, with full names and dates.

To finish, here are the parents and four children again, as children, this time 21 years previously in 1892 (the year before James Percy was born). This image appears also over on Ebeth’s page.

*   Winifred was Mina’s sister Jessie’s grand-daughter, so both she and Norman were great grandchildren of Rev. David Laughland and Mary Black aka 2nd cousins.

** Extra detail according to Annette Marie Collins‘s research on Geni, (whose work comes down the Laughland side from Young and Laughland in Stewarton to Rev. David Laughland – Mina’s father: “At the time of his second marriage [1934] Alexander Reid Borrie was a widower living in Calcutta India and working as the Manager of Central Hydraulic Jute Press. Alexander was 53 years and his wife Wilhelmina Black Laughland Logan was a 29 year old spinster.” Died: 4 Oct 1952 in Edinburgh. Note: Calcutta, India, was then the capital of the Raj India (now Kolkata, the capital of West Bengal). Central Hydraulic Jute Press according the The Calcutta Times of 25 March April 1936 was one of 31 licensed non-seasonal companies, and was based at 243 Upper Chitpur Road). [Here is a contemporary company/product that sounds similar.] (Raw jute is pressed to help form fibres, which is then processed to be used for sacking and rope, and Kolkata is still a major centre.)

*** Ebeth Newton (nee Scobbie) re-married in 1930 to Robert Galloway at Greenbank, Morningside, which was the Logan’s church. She lived some of the time with her sister, I think, and presumably met widower Robert who lived nearby at church. As for Jack Newton, after a little extra research I seem to have to have found more information – see here on David’s background.

https://www.bbc.co.uk/programmes/b02m7fzt “The Long Summer”, part of “1913: The Year Before” presented by Michael Portillo

The GENi site reports a lot of research independent from mine/Elizabeth Mitchell’s, by Annette Marie Collins and Gordon Meiklem Thomson. They have contributed material on the Laughlands, Borries, Logans, and Huttons. Most of the material on this page was sourced by Elizabeth up to 30 years ago, and a lot has been more recently checked by me with additional material added beyond the bare names and dates and occupations.

Annette and I are 5th cousins. She is descended from David Young, her gr-gr-gr grandfather, while I am descended from Elizabeth Young, my gr-gr-gr grandmother (and Mina Laughland’s paternal grand-mother).  Her research shows they were siblings., and that our common ancestors were therefore their parents William Young (1755-1855) and Janet Calderwood from Stewarton, Ayrshire, our great x4 grandparents. [William on GENi] [Rev David Laughland and family on GENi in a tree of nearly 1000 linked people]. For a few notes on David Laughland by me, see the diamond, gold and ruby page.

James’s diary mentions the Stewart-Logan wedding, and says Neil “McMartin” Stewart was the son of Dr George Grant Stewart of Cadboro Bay, Vancouver Island (and that Catherine was “S./O.” signals officer?) Neil can be found on http://www.nauticapedia.ca (under “macmartin”)

This site uses Akismet to reduce spam. Learn how your comment data is processed.