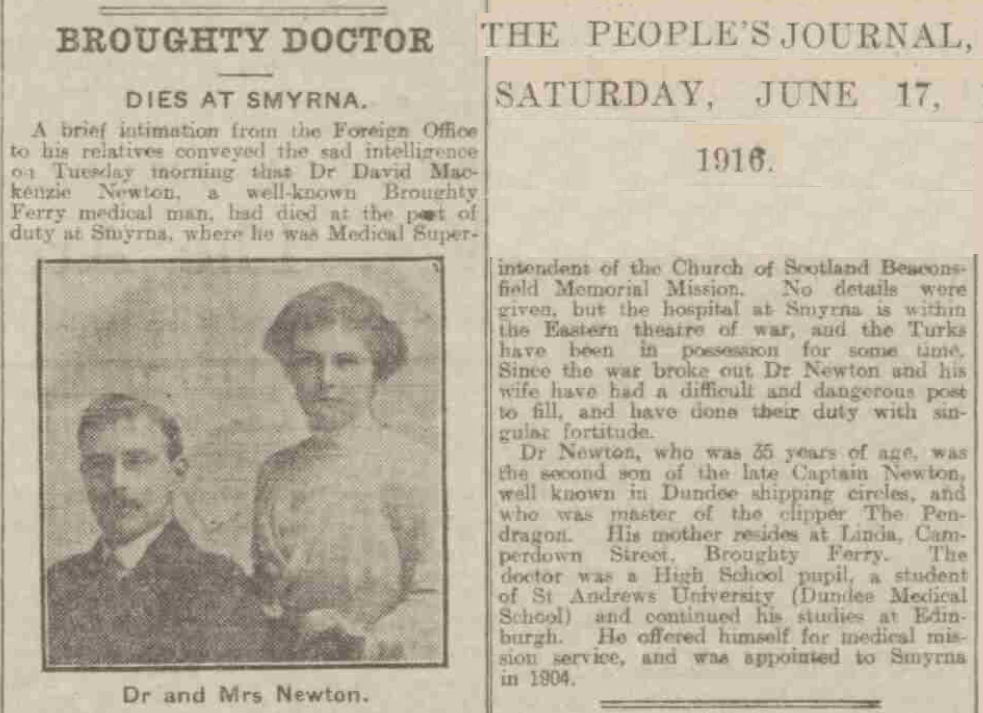 At the time of his death, Dr David McKenzie Newton had been a medical missionary for around a dozen years, and was the superintendent at Beaconsfield Memorial Hospital. It seems he also had a wider role, being identified also as “the college physician” by Smyrna’s International College in Paradise near Smyrna, an American educational institution which had been run by missionaries for 25 years.

His death (30 May 1916) from typhus, a family of bacterial infections carried by lice, aka “jiggers”, was probably caught in the course of his work tending patients, including Turkish soldiers, and due to the terrible conditions discussed elsewhere. His death was reported in contemporary newspapers and reports, and the aftermath was the subject of governmental communications (hence, luckily, preserved in the National Archive), as the Church of Scotland (his sponsors) and the families of David and his widow Ebeth attempted to help her in her perilous situation (see here).

Who knows the complex range of factors that motivated such a commitment, 100+ years ago. Despite the clear proselytising and evangelical nature of the institutions for whom they worked, or their individual religious motivations, it seems highly likely that the dedication and sacrifice of people like David and Ebeth was in part purely humanitarian. In Scotland, such humanitarian work was generally set in the social context of the time that supported and promoted Christian beliefs generally and more specifically sought to increase the influence of specific sects within the protestant tradition against others. Nowadays, I like to imagine David being one of the thousands of people who volunteer to work overseas for NGOs like Médecins Sans Frontières, whose values are “Medical aid where it’s needed most. Independent. Neutral. Impartial.”

David Newton and the other medical missionaries treated everyone, I assume, and were probably better people than me or many others in our extended families, but their religious motivations for creating a mission specifically aiming to convert members of a Jewish community to Christianity are likely, nowadays, be seen simply as (institutionally) anti-Semitic, albeit in a well-meaning, patronising way. (The Mission itself was built up by Dr Levi Prinksi Scott, see here.)

For me, seeking to convert people to a faith as the prime motivation for undertaking medical missionary work is repellent, in the modern context, even when there are positive medical or educational benefits in the short or long term. But things were different then.

Under that headline, the following article (and the photograph of the couple) appeared.

A brief intimation from the Foreign Office to relatives conveyed the sad intelligence that on Tuesday morning [30 May 1916, sic] Dr David Mackenzie Newton, a well-known Broughty Ferry medical man, had died at the port [or post?] of duty Smyrna, where he was Medical Superintendent of the Church of Scotland Beaconsfield Memorial Mission. No details were given, but the hospital Smyrna is within the Eastern theatre of war, and the Turks have been in possession for some time. Since the war broke out Dr Newton and his wife have had a difficult and dangerous post to fill, and have done their duty with singular fortitude.

Dr Newton, who was 35 years of age, was the second son of the late Captain Newton, well known in Dundee shipping circles, and who was master of the clipper The Pendragon. His mother resides at Linda, Camperdown Street, Broughty Ferry. The doctor was a High School pupil, a student of St Andrews University (Dundee Medical School) and continued his studies at Edinburgh. He offered himself for medical mission service, and was appointed to Smyrna in 1904.

On Thursday 15th of June 1916 a bare death notice appeared in the Dundee Courier (with the wrong date of death), from the Newton family, and another in the Saturday 17th June edition of the Hamilton Advertiser from the Scobbie family. Note the different spellings of MacKenzie / McKenzie – they are very variable. Usually also McKenzie is clearly just a middle name but sometimes it almost takes on the character of a double surname. “Linda” is the name of the family home; I have no idea why.

Physician for the International College

On page 92 of the 106th Annual Report of the American Board of Commissioners for Foreign Missions, together with the Minutes of the Meeting Held at Toledo, Ohio, October 24 1916, there was this reference to the death of David Newton (p26 of 37 in the pdf):

“The college physician, a member of the Scotch mission in Smyrna, died of the typhus during the summer while caring for Turkish soldiers in the hospital.”

The Western Turkey part of the report noted the difficult ongoing conditions, and though it is tempting to reproduce its fascinating text here, it is better to focus on the College, which offered education to members of the local community, starting on page 90. But even the College’s introductory paragraph does not anticipate that the president’s focus will be pestilence, famine and war.  Factually, I mean, not as scriptural reference.

The college had students from Greece and the interior of Asia Minor, around 150 of them day pupils from Smyrna and the vicinity, and around 60 boarders. Eleven “nationalities and religions” were enrolled – most students were Greek (83) or Armenian (68), and the other reasonably big groups were Turkish (26) or Jewish (19). And most were Ottoman, which presumably means they were citizens of the empire.

MacLachlan’s report is blunt about the problems faced, but strangely optimistic. Perhaps it is just an example of the bias found in most reports. They tend to say “we are doing a great job!”

and, as noted above, Dr Newton is mentioned, though not by name. The report ends with the expectation of further expansion:

In early 1904, David was preparing to leave for Smyrna, as reported here.

and here is the report of the departure, a few days later.

Here’s a later report that is more transparent about how these missions were trying to spread their faith, not (just) to provide medical care, or education or establish institutions to promote human rights, humanistic values and culture. For some of the money-raisers, the bottom line was the number of new converts. To me, while bringing medical care or education to an increasingly large part of the world is laudable, religious proselytising is something shameful. All round us in the modern world, we see the problems caused by people thinking their own religious belief system is the correct one. Or indeed that any such belief system is correct.

I knew I needed to check out David’s will, and was able to thanks to Ancestry’s weekend of free access in August 2019. The probate index states:
Late of “Linda,” Broughty Ferry, Medical Missionary from the Church of Scotland Committee, for the conversion of Jews, at Beaconsfield Memorial Hospital, Smyrna, Asia Minor, d. 31/05/1916 at Smyrna, testate. The value of the estate was ~£2,400 (thanks to the life insurance policies mentioned here in the archives).

This information was also useful because it contained an unfamiliar (and conveniently unique) name: John Donald Mills, architect, 10 Tay Square, Dundee. That turns out to be a useful clue, helping me identify the correct Dundee Newton family in the census, because it turns out he was a brother-in-law. More on David’s family can be found in Newtons of Monifieth.

Elsewhere, I am writing about my great-grandparents William Henderson Stevenson and Mary Black. Born around 1853, William also died young, of disease, in Bihar (India) around 1888, also at the age of 35. He was a Free Church missionary. See STEVENSON in the Storyshelf index and/or search using the category cloud. I am slowly putting information online.

This familiar tragic situation, a generation before, had caused the widowed Mary to come back to Scotland to bring up her two sons (later also doctors) and daughter, Elizabeth. This Elizabeth married Ebeth’s younger brother George Hill Scobbie in 1909. This couple were my paternal grand-parents, and they named their third daughter (born 1914) Ebeth.

Like her cousin Elizabeth McKenzie Newton (who was born after her own father David’s death) Ebeth Scobbie also became a doctor, and is the subject of this specific post.  Meantime, you can see the church named after William (one of the oldest in Eastern India) in this entry on Pachamba on Wikipedia, and here is my posting about his pamphlet on Woman’s Work on Heathen Lands.

For more on the founding of the Scotch Mission and the Beaconsfield hospital see the introductory Smyrna entry explaining the topic, which is orientated around Ebeth, David’s wife.

This site uses Akismet to reduce spam. Learn how your comment data is processed.